A six months trial of a St Helier town Hopper Bus service in the past proved very successful. Some years on, the traffic situation in town is worsening, the air quality is bad, and pedestrians and cyclists are suffering because of the congestion. An initiative to reintroduce a town hopper bus service has been launched.

The service should primarily encourage commuters, shoppers and town goers to leave their cars in the major car parks, which in return would reduce the number of private cars in the town centre.

This would improve the air quality, benefit the environment, the cleanliness of buildings and make town a more pleasant place to be. It would also get the big buses out of the town centre, which often have difficulty manoeuvring around
the narrow roads and corners.

People who use the service would be having a positive "feel good" impact on St.Helier.

The service would be especially valuable for elderly people, families and visitors.

The Hopper Bus should:

The ideal scenario would be a free service. If that is not possible it is recommended that the fares should low and easily affordable, to encourage people to use the service.

The route, which was used in the trial period in the past, still seems to be viable. However it is suggested to add a loop around the General Hospital and the Grand Marche Supermarket at Gas Place. 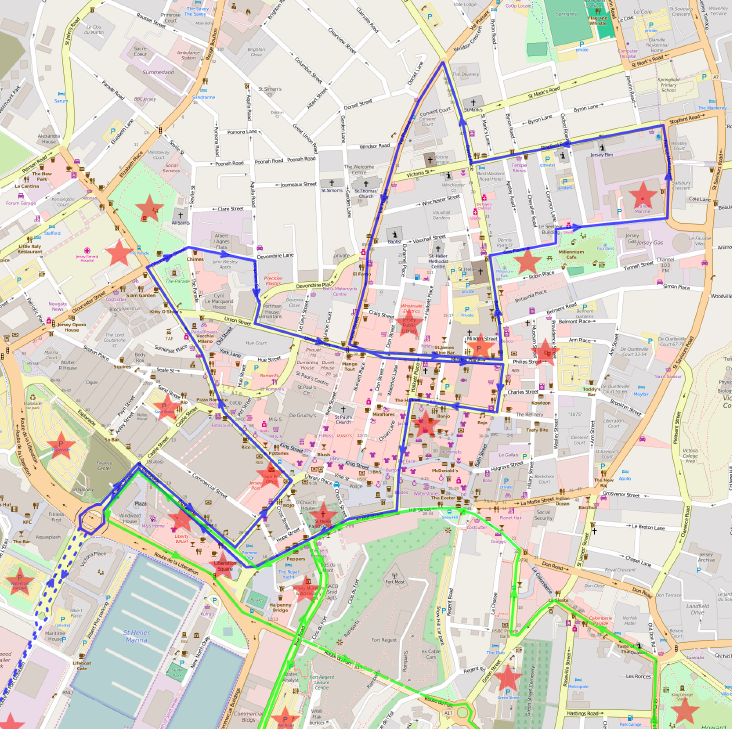 Minor issues in the existing traffic system (e.g. No right turn from The Parade to Canon Street) will have to be addressed.

There is no doubt, that the traffic concentration and congestion in the town of St.Helier is a serious concern. Furthermore the air quality is bad and as a consequence of these combined factors the town experience for pedestrians and cyclists is unpleasant and often unsafe.

To reduce the motorised traffic influx in town via a Hopper Bus service would certainly be a way forward, followed by more traffic free zone in the future.

It is important that the citizens of Jersey recognise the urgency and that the Hopper Bus system is promoted in such a way that people find it attractive to use and are proud of their contribution to a healthier, safer and more pleasant town experience.